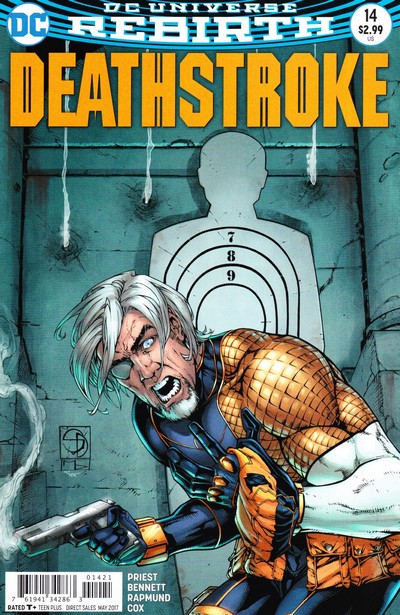 While DC Comics is earning more of my money these days than at any other time I can remember, and while I have a history of gravitating mainly or solely to super-hero titles, Deathstroke remains the only title from DC's main cooperative universe (a.k.a. Batman Town) that I pick up. And considering the meh to jesus-please-kill-it quality of the last few Deathstroke titles, I sure as hell wouldn't be picking it up if DC hadn't gone and done the thing I didn't dare hope anyone would be able to do: they convinced Christopher Priest to write funnybooks again.

I don't like admitting it, but sometimes Priest confuses the hell out of me, and the slick bastard does it in such a way that I can't help but say to myself, "well, it's probably me who's the asshole for being confused."

Many of the hallmarks of Priest's innovative Black Panther continue here with Deathstroke, and sometimes it's not the easiest stuff to parse through. Here, just as in the Marvel series, Priest weaves intricate conspiracies too complex to not be based on real global socio-economic fuckery and injects it into the comparatively cartoon world of a man in bright blue-and-orange tights. He also hasn't been shy about employing the Tarantino-esque time shifts that helped define his Black Panther. Put all of that into a mixing bowl with the simple fact that I do not know my DC continuity as well as I should whereas Priest (who apparently did not know who Deathstroke was when he was approached by DC to write the series) has done his research as thoroughly as ever and his stories reflect this, you can end up with a bunch of comic books that impress the hell out of this grown up Marvel kid, but also leave him feeling a little dizzy.

Whether it's just my imagination or not, as Deathstroke has continued, Priest has eased up on some of  his more defining tools, and honestly it's been a relief to me. For example, in this most recent issue, Priest still reserves a black panel to give us each scene's name, but as far as I can tell, each scene actually unfolds in chronological order. Like, linear. Like, as if one thing happened and then another happened and, hence, this is how these things were portrayed.

Wow.  I really have a knack for writing positive reviews that can tend to sound pretty snarkily negative, huh?

Okay, so let me be clear; I liked Deathstroke #14.  I like Deathstroke. It seems likely I'll keep picking up Deathstroke as long as Priest is writing in it. Because of awesome.