Save It For Later 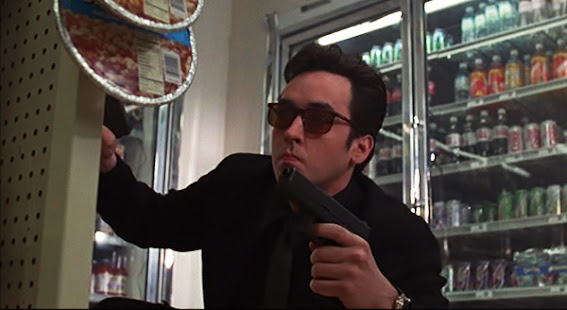 That's from Grosse Pointe Blank. John Cusack. During a break in a gunfight, Cusack explains to Minnie Driver -- from the other side of a bathroom door -- why he stood her up at prom a decade earlier and started on a path that led to him becoming a professional hitman. He references his dysfunctional home: a mentally ill mother and an alcoholic father. This isn't an excuse, he says. It's a reason.  "My soul was empty -- and it's up to me to fill it."

I find myself looking down a similar barrel. Minus a lot of specifics.

I have never felt such overwhelming despair. There is my girlfriend. There are my cats. Everything else is darkness. In an uncharacteristic move, I will avoid details. On one hand, making my particular bummers public will only invite more negative consequences. On the other, in a similarly uncharacteristic development, I am too thoroughly bored with my own despair to elaborate. I am always on the edge of stupid, useless tears. There is nothing waiting on the other side of the bad things. There is bad and more bad and sleep and then repeat.

So here is my response. I will lose the weight and take the pills and stop the binges and work and write. I will keep having the ineffective talks and making the ridiculous schedules and going to the gym. I will budget and save and take my vitamins and drink my water and recycle.

But I have nothing else. Everything is gone. It wasn't flushed -- it wasn't there in the first place. The beacons were never lit. God was always dead. There was never a light at the end of the tunnel. There was never a light or a tunnel. There is nothing more than a yawning void. Everything is suffering and I will keep going because there is simply nothing else to do.

My soul is empty and it's up to me to fill it. I'm not sure what I'll find. Jesus, I hope it isn't Jesus.

I think the interpretation of song lyrics is highly subjective.

I also think Dave Wakeling is a motherfucking liar.

I know what "Save It For Later" is about. I listen to the song every day. And every time I listen to it, I make a promise. It's not a hard promise to keep because I'm a coward. Always have been. Always will be. But still. I save it for later. I keep going. The alternative is unthinkable, as much as my feelings scream at me otherwise.

Also, just to keep everything above board -- more often than not I listen to the Harvey Danger version from the soundtrack of 200 Cigarettes. I like it better. Don't judge me. Or do. Everything is stupid.