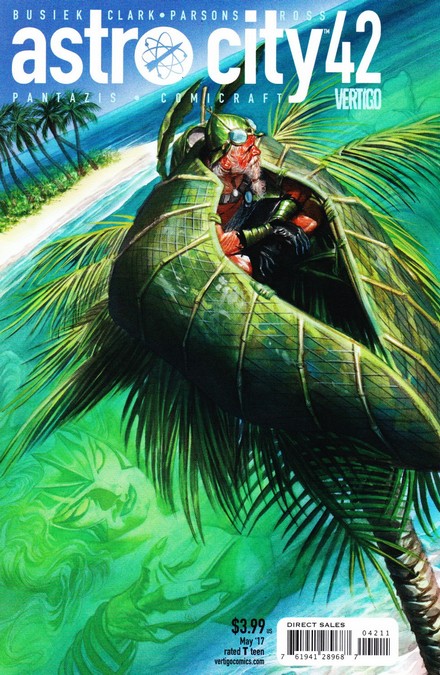 Familiar and new, the latest issue of Astro City gives us the story of Mister Manta: a super-villain marooned on an island after a battle with the aquatic hero Mermaid.  Separated from civilization for decades, Mister Manta has built himself a home on the island as well as an experimental set of rocket powered wings he hopes will get him home and back on top of the bad guy food chain.

Regular penciller Brent Anderson is replaced with Matthew Clark in this issue, and his sharper edges bring a nice change of pace without contrasting too much from the rest of the series, and the same could be said of his more modern sensibility.

The theme of this issue - of a character feeling trapped and coming to question his/her perception of being trapped - is not a new one to Astro City.  Mister Manta's shelter on his island, while constructed from nothing more complicated than bamboo and grass, is more impressive than anything that Gilligan and the Skipper ever slapped together in a hurry. The house is a multi-leveled structure and when we first meet him he is considering adding a new "wing." But soon he pushes aside the notion, opting instead to throw his energies toward his escape. Once opportunity arises however, Mister Manta finds himself questioning exactly what it is he wants.

The theme is a recurring one in Astro City, but Busiek's dressed it in interesting new clothing.

Regular visitors to Astro City will likely be reminded of the villain Junkman from Astro City #10 (from the second volume, published by Image). Junkman wants to pull off one more perfect heist before he retires, and he succeeds: getting away with millions under the noses of Astro City's heroes.  We see the ageing crook relaxing on a sun-soaked beach, but eventually the fact that Junkman's greatest victory was such that no one will ever know about it is too much for the old fool, and he returns to Astro City where he predictably returns to his life of crime and is more predictably captured and put on trial.

Astro City #42 turns the Junkman story on its head. Mister Manta is already on the sun-soaked beach, has been there for decades, and is trying desperately to get home. But once the possiblility to return becomes a reality, Mister Manta doesn't know what to do.

It's also interesting to wonder if maybe Astro City #42 is the answer to the question of why and how so many super-villains have headquarters on remote islands.  Maybe every super-villain is just someone who is A) trapped, B) resourceful, and C) never sure whether or not they want to go home. 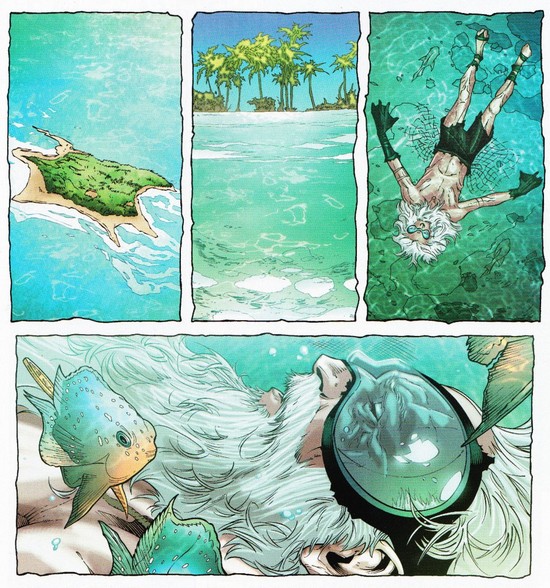 Very nice write-up. I think you hit it pretty well. One of my first thoughts when going thru the issue, was this has elements of the Junkman's story. And with over a 100 stories/issues, it's not surprisingly that we start seeing kind of parallel and inverse type of stories.
Overall it wasn't a super issue, but still good. The biggest problem for me, it was a really fast read...

And the guest in artist are kind of hits, misses or alright, due to Anderson's style and detail being such a huge part of the series. Some of the more cartoony style guys kind of detract for me. Jesus Merino and Tom Grummett have been the best. They have their own strong distinct styles, yet carry that same flavor and detail that Brent has created for the series.
Clark was pretty good. Granted it didn't take place in Astro City, but very nice detailed drawing. And you're right his drawing seems to work better with modern coloring than even Andersons.