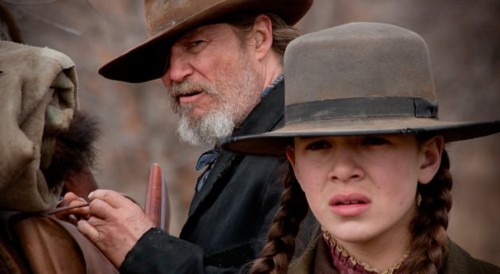 Child actors are usually something to be endured, not enjoyed. Not the case with Hailee Steinfeld who plays the stubborn, determined Mattie Ross in the Coen brothers' remake of True Grit. I was astounded. When the movie opened with Steinfeld as the only leading actor immediately on the screen, I was expecting, as usual, to silently groan through the same kind of bad acting you might expect in, say, any scene in any Harry Potter movie, until eventually one of the grown ups like Jeff Bridges or Matt Damon showed up. But Steinfeld kicked my ass. I never saw the original True Grit so I can't speak to how Steinfeld compares to Kim Darby, but I can't imagine anyone doing a better job as Mattie Ross. It's an absolute joy to watch Steinfeld act, and I'm looking forward to seeing what she does next.

But everyone brings their A-game in True Grit. Bridges might not be the first actor most would choose for a drunk, brutal gunslinger, but at the risk of attracting accusations of sacrilege, I find it tough to imagine watching John Wayne's version of Rooster Cogburn afterward and feeling anything but disappointment. Damon is great as the arrogant yet noble LaBoeuf, as is Josh Brolin as the disarmingly sympathetic Tom Chaney. Really, there wasn't anyone in this film who wasn't fun to watch, including Barry Pepper as gang leader Lucky Ned Pepper (apparently, Robert Duvall's role in the original film), though I've hardly seen anything with him that's impressed me beyond his role as the god-fearing sniper in Saving Private Ryan.

For me, the real star of True Grit is the dialogue. Dialogue experimentation, particularly when it comes to different regional dialects, is something the Coen brothers are known for and it serves them well in True Grit. There is a Shakespearean quality to the dialogue and its delivery. Regardless of how low or high brow any particular character may be, you get the sense that each character is choosing his/her words very precisely for poetic effect. I think it's something that the actors had a lot of fun with, and that appreciation enhanced their performances.

In an age when films are so much more readily available after (and sometimes before) their theatrical releases, this is the first time in a while that I've found myself impatient for the DVD to come out. I don't pay attention to awards shows and nomination announcements, and if what I've heard about True Grit being snubbed is true, then it's just more proof of exactly why I don't pay attention. Though I didn't see it until January 2nd, True Grit is easily my choice for best film of 2010.
Posted by Mick Martin at 8:00 AM

Email ThisBlogThis!Share to TwitterShare to FacebookShare to Pinterest
Labels: Movies

I think I liked Winter's Bone a bit more, but yeah, True Grit was a great film and one I'll likely watch again and again, like my other favourite Coen Bros. movies, No Country For Old Men and Fargo.