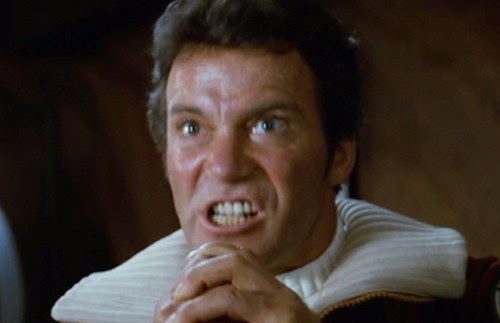 A small group of friends and I recently started a new tradition: Star Trek Sundays. We watch some Star Trek at one of our places. Usually at least two episodes. Maybe a two-parter. From any of the series. Last time we watched the two parter from TNG when Lor went all cult leader with the Borg. The week before that it was the Voyager two parter that introduced Seven of Nine as well as Borg-stacking aliens from a universe of space juice. This week was at my place and rather than choosing episodes, I showed what is easily still my favorite of the films: Star Trek II: The Wrath of Khan.

I don't know if this would make us less or more Trekkie-like in the eyes of other fans, but everyone in my Star Trek Sunday group loves making fun of it as we watch. We all love the shows and movies, but we like getting our MST3K on too.

Watching Wrath again with like-minded geeks made me realize just how many faults I find in the flick. They don't take away from my enjoyment. They're just things that have always stuck in my mind.

As far as I know, this is not the fault of the filmmakers, but for some reason when you watch Wrath of Khan on Netflix, there are no subtitles in the scene when Spock and Saavik speak in Vulcan. I tried using the Closed Captioning, but this is all I got: 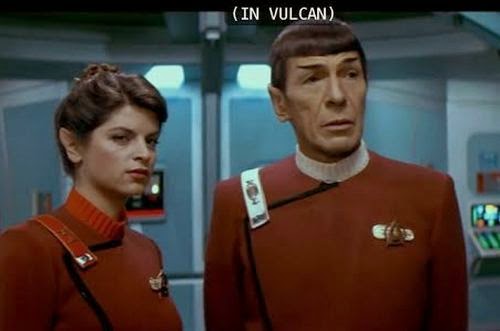 Oh wow, thanks, that's really helpful. At least I know they weren't speaking in Elvish.

Actually. There's a chance I would've thought that so, that is at least a little helpful.

So a whole bunch of these little things that stick in my mind all take place in the scene in the cargo container on Ceti Alpha Five.

Now I know a lot of people mention the fact that Khan recognizes Chekov, but that he shouldn't because Chekov wasn't part of the crew when Khan was on the original series. But I don't really care because I just always figured Chekov was on the ship, but he just wasn't command crew yet. Maybe he had a conversation with Khan off-screen where he was all, like, "Yes, I feel very under appreciated here, I would like to have a better job on this WESSEL." And Khan gave him a pep talk using some of the psychotic murderer self-help stuff, and before you know it, Chekov's the f---in' man.

What does make me scratch my head is that Chekov and his new Captain came to Ceti Alpha 5 as part of a scientific expedition, they came to it thinking it was Ceti Alpha 6, and it's Khan who has to inform them that Ceti Alpha 6 blew up almost 15 years ago.

So, upon entering a star system as part of a scientific mission, while a part of a starfleet whose ships compulsively record and catalog the tiniest fart detected anywhere in space, Chekov and his new boss didn't notice an entire g-damn planet was missing, Alderaan-style? Aged Khan of Dokken had to tell them? 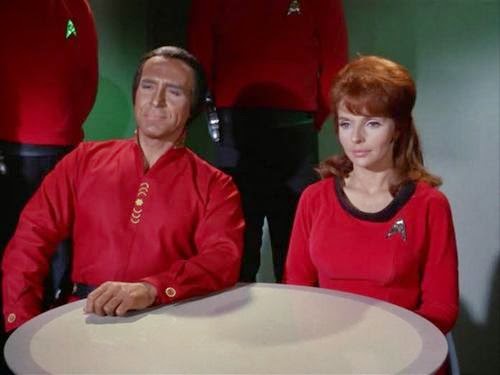 Khan and his buddies were on Ceti Alpha 5 because Kirk left them there at the end of the original series episode "Space Seed". So, you're telling me the Federation doesn't have some kind of alert system in place where if one of its ships enters a star system that is home to a centuries-old self-described world conqueror, the ship doesn't get an alert saying, "Dude, maybe don't go there"? My Google Maps knows when weather is slowing traffic, and I can find out how many sexually adventurous 20-30 year olds are within 5 miles of me on Tinder, but the Federation can't figure out some way to let its ships know that some planets have dickheads on them?


7. SPACE SUIT HANDLES: FOR WHEN SUPER STRONG JERKS WANT TO LIFT YOU 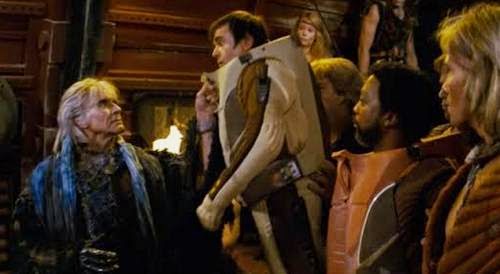 I am very curious about what other possible use there could be to the handles at the front of these space suits, other than for when super strong bad guys want to lift you off the ground. Really seems like the only potential advantage. "This way," the space suit designer said with a clever glint in his eye, "they'll want to lift you by the groin, but their hand will naturally gravitate to the handle instead."

So, okay. Okay, so Khan opens the little tupperware thing they've got the ugly little alien in with the killer ear babies. All right. 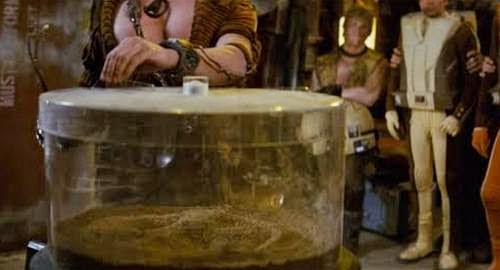 Then he grabs the Killer Ear Baby Momma with the salad tongs. I'm with you so far. 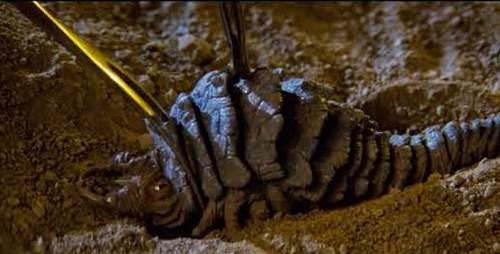 He picks the ear babies off and puts them in a bowl. Everything makes perfect sense.

DUDE! You left it open! Close it! CLOSE IT! 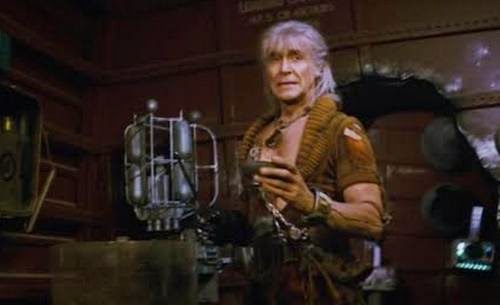 DUDE! You totally left the tupperware thing open. The tupperware thing holding the alien that killed your wife. Left it open. Gee, I wonder how that thing killed twenty people. You probably gave it their car keys and left it in their beds. 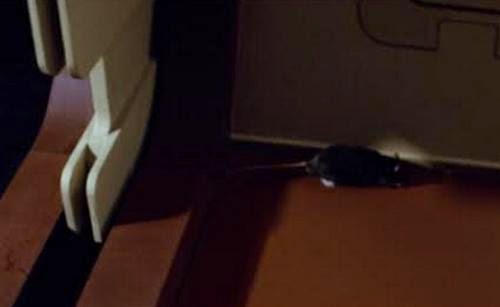 The FUCK did a rat get on a space station?

So Chekov and his captain were kidnapped and abused and all of the other bad events in this movie happen because the Reliant crew was searching for a lifeless planet to test the Genesis device. Meanwhile the team developing the Genesis device was orbiting Regula 1.

Wow. Look at all that life. 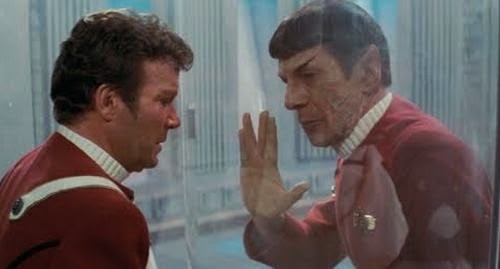 So whatever you do, Spock, right before you die, whatever you do, don't explain to anyone you transferred your soul to Bones in a last ditch effort to save your life. Because that would not only greatly increase the likelihood of the success, but might stop your friends from being disgraced and fired and possibly killed by Klingons and, oh yeah, one of your best friends from going insane thinking he's turning into you.

So we're all agreed that we should give our friend from another planet a funeral with Earth religious music right before shooting him into space, encased in a f---ing torpedo? Make sense to everyone else? Awesome sauce. 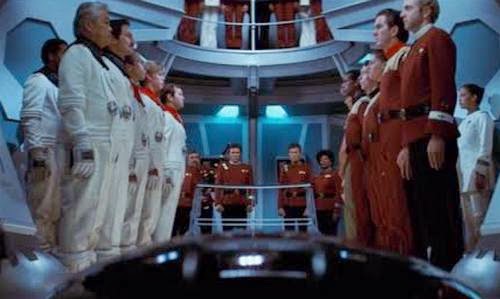 Anyone else watch this scene and think that everyone who isn't in the command crew is thinking, "Um, they do realize like NINETY other people died today right? Like, a lot of other people died. Like Bob? My buddy Bob? Yeah, he got sucked into space and exploded. But no, why don't I take a break from my busy day to honor the guy who got to say goodbye to his best friend and secretly transfered his consciousness into a friend he knocked out to ensure his immortality. Cool beans."
Posted by Mick Martin at 11:30 PM

Love it. Like you, I’m willing to accept that Chekov was on the Enterprise in Space Seed, just not onscreen. Maybe he was in engineering when Khan took it over to suffocate the bridge crew. I didn’t have a problem with the “Don’t go there” and “one of our planets is missing” issues. Hey, we have to keep this sparsely-budgeted, lean, mean narrative moving along. Fine. What has bothered me ever since I first saw this movie as a kid is…it only works because Captain Kirk is a MORON! Maybe Saavik should have prefaced her quoting of general orders with: “Admiral, we are on a ship staffed almost entirely by Academy newbs with no experience whatsoever in deep space; the gang that has developed the most powerful device in history has gone silent…jammed by an unknown assailant; and now we’re being approached by the ONLY OTHER SHIP IN THE VICINITY…one that can’t or won’t communicate. General Order Four…and COMMON #$%ING SENSE…states that maybe we should raise shields now and apologize later.” Of course, if the Enterprise had raised shields there wouldn’t have been much of a movie… Come to think of it, why didn’t Starfleet know that the Enterprise really wasn’t the “only ship in the quadrant”? Jerks.