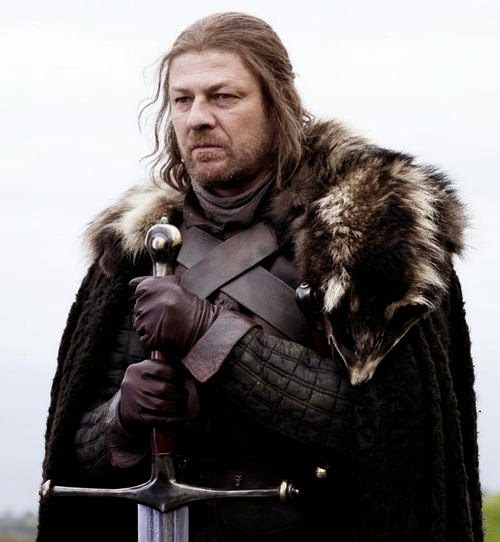 I underlined, bolded, and italicized the goddamn word, so you've got not excuse.

If you only know George R. R. Martin's "Song of Ice and Fire" series through the Game of Thrones TV series and you do not want to be spoiled with potential future plot points (I say "potential," because who knows what will be changed), don't read any further.

If you have read the books, but have not yet read A Dance with Dragons and you do not want to be spoiled, don't read any further.

So, with the caveats all out of the way, here's the theory:

The most recently published Song of Ice and Fire book, A Dance with Dragons, opens with a scene north of the wall. We meet a wildling warg and through him we learn about the ability wargs have to throw themselves into a beast before their death. If they manage this, their human body dies and their spirit/essence/mojo/force/whateverthefuck stays inside the beast. However, eventually their spirit is absorbed by the beast and they become all animal.

The interesting thing about the scene is that, as far as has been revealed thus far, this particular character has absolutely nothing to do with the rest of the story. So why did Martin decide the scene was so important?

In the books, we learn a lot more about the connections between the Stark children and their dire wolves. Jon Snow and Bran, we know, are both wargs. It seems pretty damn likely that Rickon is a warg. Throughout the books, Arya Stark experiences dreams from the perspective of a wolf; in most likelihood the wolf she chased away in order to save its life, suggesting that Arya may also be a warg. Sansa's wolf died too early for us to learn about any particular connection between them (symbolically fitting because Sansa is arguably the Stark most "lost" from her family in more ways than one). Robb clearly had a strong connection with his wolf. The attack on the head of the Umbers proved that if nothing else, however we never see anything from Robb's perspective in the books, so there's no way to know for sure.

So, if all, or most, or even just a few of the Stark children are wargs, what's the chance that neither of their parents were wargs? And if one of their parents was a warg, wouldn't it probably be the one from the north?

I'm not saying Ned Stark was a warg who kept his abilities secret from his family. I'm saying he was a warg and had no idea he was a warg. Think about it. Would any of the Stark children experience any of these abilities/visions if they hadn't happened upon the dead mother dire wolf and her pups? We are told a dire wolf south of the wall is almost completely unheard of. So, assuming he was a warg or had warg-like abilities, Ned wouldn't have necessarily had the opportunity to discover it.

If he was a warg, then I think it's possible he "jumped" into an animal or possibly even another person - as Bran is able to do - just before his decapitation. I don't think he would've done this on purpose. I think it would've been kind of like when the young Magneto bends the bars of the concentration camp in X-Men: that his imminent death shocked his abilities awake and acted for him before he knew what the hell was going on.

Now even if I'm not talking out of my ass, it would raise some difficult questions. First of all, if he did jump into an animal, wouldn't his spirit have been absorbed by the beast long ago? Second, let's say he jumped into a person (which most wargs are not supposed to be able to do, but which Bran is able to do with Hodor). And let's say the rules for jumping into a person don't work the same. Maybe if he jumps into a person before death, his spirit isn't necessarily absorbed. That would beg the question, what the hell is he waiting for? Why hasn't he revealed himself and kicked some ass?

But, I think it's a possibility, and more than anything I'm intrigued by the fact that Martin bothered to open A Dance of Dragons the way he did. I'm thinking it may have more to do with what happens with Jon Snow in Book 6.

So that's it. That's my theory. Rip it to pieces.