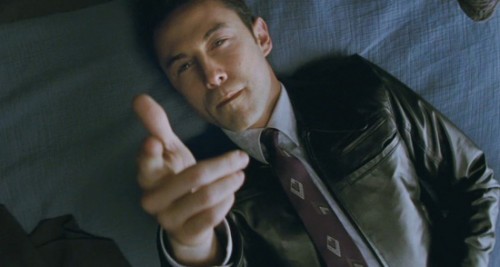 If you've ever seen an espionage thriller or a mafia flick, you've probably heard phrases like, "make him disappear," though the real life horror of falling prey to the mob likely feels less gentle than simply vanishing. In Looper's not-too-distant future, when the mob says they're going to make you disappear, they really mean it.

Joe (Joseph Gordon-Levitt) is a looper, and a looper is a very particular kind of assassin. Joe, and others like him, wait for bound victims to be sent to them from the future. As soon as they appear, the loopers kill them and dispose of the bodies. Even if the authorities should find any of the bodies or swipe some of their DNA, they'll be looking for someone who probably doesn't even exist yet.

Each looper comes with an expiration date. A looper goes into his job knowing that one day the victim sent from the future will be his own aged, future self; and he won't even know it until after the body hits the ground. He retires with a king's ransom and 30 years to spend it before the demons knock on his door.

The worst thing any looper could do is let his future self ecape or, as the loopers put it, "fail to close the loop." And that's exactly what happens to Joe when Old Joe (Bruce Willis) appears on the edge of the same cane field where Joe snuffs out all of his victims. Once Old Joe escapes, both he and the younger Joe are on the run from Abe (Jeff Daniels): a criminal sent from the future to organize the loopers. Meanwhile, Joe is hunting his future self in order to make things right with Abe and recapture his promised 30 years, while Old Joe tracks down a child who will one day become The Rainmaker - the future's most ruthless criminal - so he can kill him and reclaim the life with the wife (Qing Xu) who turned him away from crime and drugs.

What surprised me the most about Looper was how thoroughly director Rian Johnson went against audience expectation, and how refreshing it made the film. I expected the dancer/call-girl Suzie (Piper Perabo) to play the classic hooker-with-a-heart-of-gold whose impersonal charms would eventually reveal themselves to be a professional ruse hiding True Love; I expected Joe and Old Joe - like two dueling Marvel super-heroes - to knock heads at first but eventually join forces and work together toward a common goal; and more than anything I expected a Shyamalan-esque surprise ending involving the relationship between Joe, Old Joe, Old Joe's young target Sid (Pierce Gagnon) and hell maybe even Abe. In fact, while I was sold on buying tickets for Looper as soon as I heard the talent involved and the premise, the TV spots for the film made it come off as a slightly altered Inception, and again I was relieved that wasn't the case.

Johnson uses time travel as well or better as I've seen the concept wielded in any film. He makes it complex enough to remain interesting, but simple enough to remain accessible. Other than how Old Joe's memories are changing because of his trip to the past, Johnson gives us very little exposition about the mechanics of time travel and just lets us figure out the results ourselves. When Joe's friend Seth (Paul Dano) lets his own future self (Frank Brennan) go free, Abe's goons capture Seth and use torture to send messages to Old Seth. In a brilliantly grisly scene, scars appear on Old Seth's arms in the forms of written messages, and as Old Seth races to save his younger self, he comes apart at he seams.

All of the actors bring their A-games to Looper. The chemistry between Gordon-Levitt and Willis is perfect, and Willis has never played a more tragic character. His performance in Twelve Monkeys is one of my favorite of his; one of the reasons I was thrilled to see him back in another time-travel flick. While Jeff Daniels's part is relatively small, he renders Abe funny, chilling, and utterly memorable. Emily Blunt wonderfully inhabits the role of mother and reformed drug-addict Sara.

But the biggest acting surprise of Looper is the young Pierce Gagnon. Child actors just aren't supposed to be this damn good. Gagnon is creepy, touching, cute, and just so freaking impressive as Sid. So much of our appreciation of the film depends on whether or not we care about Sid, and it's impossible to not believe Gagnon's performance. I won't be surprised if we see an older Pierce Gagnon holding tiny little golden statues one day.

Looper is a thrilling, intriguing, and genuinely moving sci-fi action film. It finds an easy home in the ranks of films like Bladerunner and The Matrix representing the very best of science-fiction on the screen. I certainly never thought the director who brought us an impressive but thoroughly indie flick like Brick would offer up something quite like Looper to the table. It makes me thrilled to see what he'll do next. Meanwhile that goofy little kid from Third Rock from the Sun is quickly becoming one of my favorite actors.

I'm glad that you've pointed out the extent to which "Looper" bucks expectations, despite falling into some old trends. It makes me want to re-evaluate the work I'm doing now. Even a simple inversion of what we're used to seeing can feel really fresh by comparison.

Any online industry is not just the future, but even the present, including gambling, and all this has entered our lives forever. Also, less and less people will go to real casinos, and they will play online casino , since it is much more convenient and comfortable, since you do not need to go anywhere and pay for winnings is done in convenient ways.